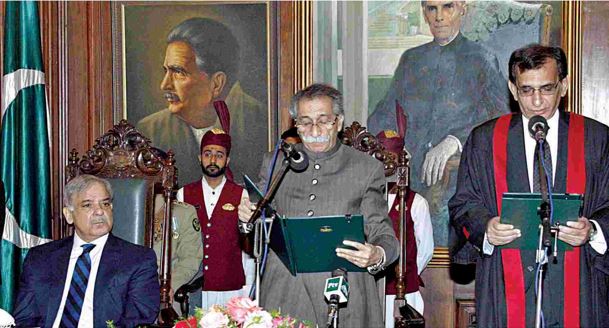 Chief Minister Shahbaz Sharif launched a new phase of Schools Reforms Roadmap `Parho Punjab Barho Punjab` in a ceremony arranged by the Education Department at Aiwan-iIqbal here on Monday.
In the new phase, he said that school students would have to give correct answers to at least 85 per cent questions in examinations which would help improve standard of education and abilities of students.

Thechiefministeralsoannounced adopting a school in the rural area ofLahore and said he would supervise the affairs of the institute and visit it from time to time.

He said that provincial ministers, chief secretary, secretaries, heads of different departments, commissioners, RPOs, DCOs and DPOs each would also adopt a school.

The chief minister said that today a commitment would have to be made that no effort would be spared in achieving the educational target for the year 2018. He said the Punjab government had made investment of billions of rupees in the education sector during the last seven years, but the journey was very long and much was still to be done.

Mr Shahbaz also formally inaugu-rated the enrolment campaign for the year 2015-16 by signing admission forms of two children as well as giving them textbooks, bags and stationery.

He said that targets set for the education sector could not be realized without a system of encouragement and punishment.

He said those performing their duties well would be encouraged and respected while those showing unsatisfactory performance towards achievement of educational targets would be held accountable.

The chief minister said that additional subjects based on tolerance, love and brotherhood were being included in the syllabus of educa-tional institutions and seminaries which would help curb the menace of extremism.

He said there was a need to launch a crusade against extremists, looters of national resources and those creating hurdles in promotion of education.