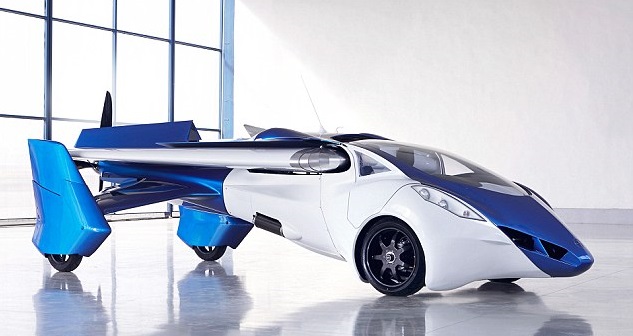 It has been a sci-fi dream for decades - a car that can simply take to the air to avoid traffic.

However, a Slovakian firm has said it has finally cracked the problem - and it will sell in it just two years.

The AeroMobil can fly 430 miles on a tank of petrol - and when its wings fold down, it'll fit into a normal parking space.

Aeromobil is a 'flying car' that can fit in a standard parking space, and could both take off and land at any airport in the world.

When in flight mode, it can go 430 miles, reaching 124mph - but can fold up its wings to travel on the road and fit in a single parking space.

Aeromobil is a 'flying car' that perfectly makes use of existing infrastructure created for automobiles and planes, and opens doors to real door-to-door travel,' the firm says.

When in its car configuration, it can fit into a standard parking space, and it also takes normal fuel pumped at every service station.

The latest version is the third generation of the craft.

'It is now finalised and has been in regular flight-testing program in real flight conditions since October 2014,' the firm said.

At South By Southwest, Juraj Vaculik, co-founder and CEO of AeroMobil, spoke at a panel about the future of flying cars, predicting a world ahead in which these vehicles easily merge with existing transportation.

He says it will be on sale in 2017, and that the firm was also developing a self driving (and flying) version.