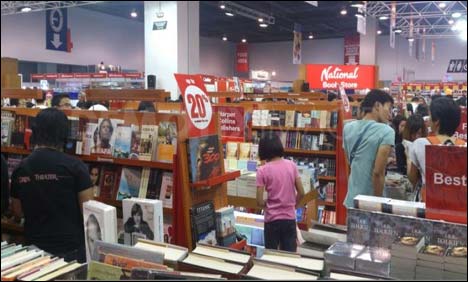 Like every year, every book-lover attended 11th Karachi International Book Fair which took place on Thursday, November 12th at the venue of Expo Centre. Began on November 12 ’15, KIBF and remained for five days till November 16 ’15 was announced by the chairman Aziz Khalid on Tuesday in a press conferential address at a hotel.

While addressing the accomplishments of fair of holding three halls today, he mentioned in his address that it started off with one hall occupying the entire exhibition of the books. Furthermore, he mentioned about continuing the successive career of this book fair in promoting an appreciable reputation of Pakistan, globally. While his address, he mentioned the significant role of books in inducting the obligation of the achievement of knowledge among the children. He also revealed the competitions arranged at KIBF to develop the interest of the children in books.

He profoundly appreciated the enthusiastic role of media in making all the previous book fairs a huge success. While appreciating the regularly increasing number of the visitors at book fair, Mirza Jameel being a KIBF gladly expressed his emotions. According to his mentioning, this time book fair was inaugurated by the leader of the opposition in national Assembly – Khurshid Shah and Nisar Khuhro, the provincial education minister as a guest of honor.

Book fair encompassed 330 stalls, 140 booksellers and publishers from Lahore, Peshawar, Jhelum and Faisalabad along with other companies as well. With an estimation of discounts up to 70%, people of minimum 450,000 visited book fair this time.