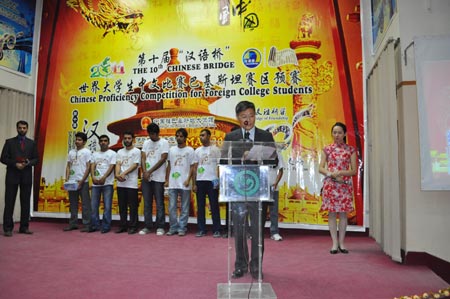 Following in the footsteps of Saudis, the Chinese have now taken to promote their culture at Pakistani educational institutions. The Chinese government has contributed towards the expansion of the `Confucius Institute` at the National University of Modern Languages (Numl) in Islamabad. `As the Chinese economy expands, there is a rapidly growing demand for learning Chinese language,` said a Numl professor, requesting anonymity.

The professor said the Saudis are contributing towards the Islamic University while Americans have contributed towards the establishment of the American Centre at the Quaid-e-Azam University. `Now China is also jumping in the fray and if three big players are giving us financial assistance, it is a good thing,` he said.

The Confucius Centre was originally established several years ago and is jointly run by Numl and Chinese educationists.

The vice president of the institute, Dr Zhang Daojian told Dawn that China wants to promote its culture and improve people to people interaction. `This centre will contribute towards cementing Pak-China relations,` he said.

The newly-constructed Confucius Centre building was inaugurated on Thursday. The inauguration ceremony was attended by a Chinese delegation, Numl Rector and Numl Director General, among others.